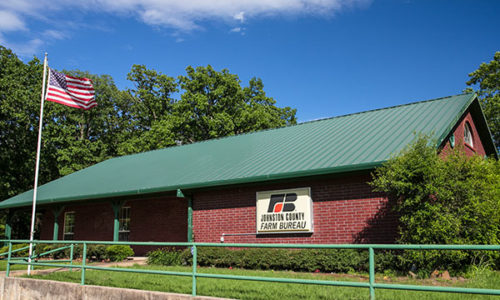 Join Johnston County Farm Bureau online using our online membership portal. When you join online, you can pay your membership dues with a credit card using our secure online portal. When joining online, a $2 convenience fee is charged.

Johnston County Farm Bureau is located in Tishomingo, Oklahoma. Tishomingo is the capitol of the Chickasaw Nation, where they hold their annual meeting and festival. Our county’s top agriculture commodities consists of cattle-calf operations, hay and some wheat.

We sponsor all local 4-H clubs and FFA chapters, sports activities and school functions of all grades along with the Murray State College.

Johnston County was named after Douglas H. Johnston, who was elected governor of the Chickasaws in 1904. Present day Chickasaw governor Bill Anoatubby grew up in Johnston County and was a graduate of Tishomingo High School and Murray State College. The Tishomingo Cemetery is known to be the states oldest burial grounds since 1832 with interments of Douglas H. Johnston, Robert M. Harris, William H. (Alfalfa Bill) Murray and Johnston Murray.

Many are attracted to Johnston County by it’s the beautiful wooded streams, Pennington Creek, Washita River and the National Wildlife Refuge, Blue River a trout-fishing destination, stocked by the National Fish Hatchery; you can get lost in the history and beauty. This was an attraction to country music celebrity Blake Shelton to settle in this area, open his first restaurant, live music venue and retail space inspired by the chart-topping hit, “Ole Red.” He has now added The Doghouse, which includes a venue, dance hall and private event space.