Adam Bohl, a fifth-generation Chattanooga farmer and Comanche County Farm Bureau member, recently explained the impact of the United States-Mexico-Canada Agreement on farmers and ranchers in a story with KSWO 7 News in Lawton. 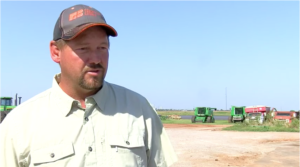 The trade deal, which went into effect on July 1, replaces the previous North American Free Trade Agreement and is expected to increase U.S. agricultural exports by $2 billion.

“Some of the improvements are Canada and Mexico will treat all imports from the U.S., and grade them on the same scale system as they would domestically,” Bohl said in the story. “Canada previously had graded imported wheat differently than they did domestically.”

As Oklahoma farmers continue to grapple with a struggling farm economy, Bohl said the agreement brings producers some certainty and optimism.

“It also gives me the security of knowing we have this agreement for the next 16 years,” Bohl said. “Production agriculture, we can’t think about our plans for today or tomorrow. We’re making decisions for anywhere from 6 to 24 months from now on our production.”

View the full story on the KSWO 7 News website.