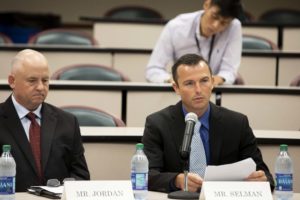 Selman emphasized the U.S. Department of Labor’s recently proposed rules to modernize the H-2A program, which is used by farmers and ranchers to secure reliable and skilled farm workers from foreign countries. The new proposed rules would streamline and simplify the H-2A application process.

“We need revision of the H-2A program to remove those things that don’t make sense and that are overly burdensome,” Selman said during his testimony. “The process should be simpler so it’s better for me as the producer and better for them as the workers.”

Selman is forced to hire independent contractors each year to file H-2A paperwork to because completing it himself would be a full-time job and hinder his responsibilities on the farm. In some years, he said the complicated process of receiving workers through H-2A has cost him significantly in both crops and money.

“One of the most challenging aspects of my business is having the right number of workers when I need them,” he said.

Encouraged by the Department of Labor’s recent proposals, Selman offered a couple of suggestions to improve the H-2A program including approving guest workers’ visas for five years and allowing works to come and go as work is needed.

“What we will do is take this (Selman’s testimony) back and help distribute it to the right committee with our endorsements behind it, and use it to create bills,” Hern said.

Selman was joined at the hearing by Christopher Jordan, president of Farmers State Bank in Stigler; Howard “Bud” Grounds, director of regulatory affairs for the Petroleum Alliance of Oklahoma; and Elizabeth Osburn, senior vice president of government affairs for the Tulsa Regional Chamber.