You are here: Home / News Center / Legislative update: Winding down an unconventional session

On Monday, May 4, the Oklahoma Legislature returned to the state Capitol to launch the final phase of an unorthodox and challenging 2020 session. 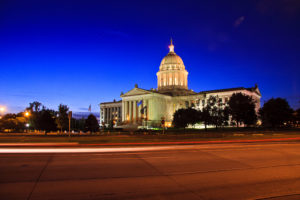 Leaders from the House and Senate unveiled a $7.7 billion budget agreement that will be $238 million or 3.0% less than the current fiscal year. Under the plan, the $1.4 billon deficit that was projected in April by the Board of Equalization will be offset by using reserve funds and state agency appropriations reductions of 4% in most cases.

The Oklahoma Department of Agriculture, Food and Forestry would receive a 7% cut and the Department of Education is slated for a 3% downturn. However, overall education funding could be leveled out with federal emergency relief funds. The budget also included $134 million in funding for the state’s portion of Gov. Kevin Stitt’s Medicaid expansion plan.

Bills to begin implementing the House and Senate budget agreement were advanced throughout the week and are now awaiting gubernatorial action. All eyes will be focused on Gov. Stitt’s office as he deliberates signature or veto. In a highly unusual course of events, the proposed budget plan was not agreed upon in advance by the governor. While the legislature awaits his action, they are expected to take up a very small number of policy bills. The measures that will be considered are still unknown, but the OKFB Public Policy team is working with legislators to evaluate the remaining agenda.

Several OKFB priority issues remain eligible to be heard, including multiple bills that would establish incentives for doctors who locate in a rural area and modify procedures for increasing access to broadband internet service. Also pending is HB 1992 – the Public Safety Protection District Act – which passed the House of Representatives in February, but has had no action taken as of yet by the Senate.

The legislature may continue its work through May 29, but a swift and early adjournment is expected once the final budget action is complete.