The OKFB Ag Fund board, comprised of farmers and ranchers from each OKFB district, met Thursday, May 28 to donate a total of $39,000 to candidates and to choose candidates for endorsement. 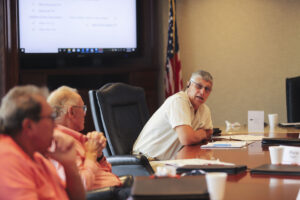 Based on the recommendations of Farm Bureau members from across the state, the Ag Fund supports candidates who uphold the beliefs and values of rural Oklahoma. While the Ag Fund contributes financially to candidates, an endorsement is the highest level of support the committee gives to chosen candidates.

The Ag Fund has endorsed Todd Hiett, a candidate running for reelection as corporation commissioner.

“So much of our day-to-day lives on the farm are impacted by the decisions that are made by the state Legislature and statewide elected officials,” said Keeff Felty, OKFB Ag Fund chair. “The OKFB Ag Fund gives us as farmers and ranchers the ability to support candidates who know and understand the realities of how we do what we do and why we do it.”

The OKFB Ag Fund is supported by voluntary contributions from OKFB members across the state as an option portion of their membership dues. The Ag Fund board will meet to consider further support following Oklahoma’s June 30 primary election and again after the Aug. 25 runoff election.