Each year, Oklahoma Farm Bureau Young Farmers and Ranchers recognize members for their achievements through several awards presented at the OKFB Annual Meeting to be held Nov. 8-10, 2019 in downtown Oklahoma City. OKFB YF&R members are encouraged to apply for the awards, due to the home office by Oct. 1. 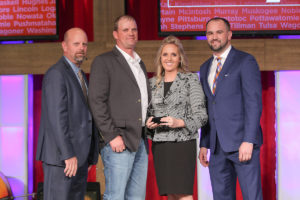 The YF&R Achievement Award is presented to OKFB’s top young farmer and rancher, and is based on his or her efforts in production agriculture and leadership achievement.

The winner will be announced at the OKFB Annual Meeting on Saturday, Nov. 9 in Oklahoma City. The Achievement Award winner also will win a trip to the American Farm Bureau Federation Annual Meeting in Austin, Texas, in January to compete on the national level. 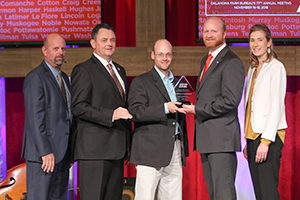 The Excellence in Agriculture Award recognizes YF&R members who are actively engaged in agriculture, but have not received a majority of their income from production agriculture in the past three years. Applicants are evaluated on their knowledge of agricultural issues, leadership experiences and achievements, and their ability to communicate their agriculture story.

Applicants must be Farm Bureau members between the ages of 18 and 35 who have not derived a majority of his or her income from production agriculture in the past three years.

The Excellence in Agriculture Award also will be presented at the OKFB Annual Meeting in November. The winner will receive a prize package and a trip to Austin, Texas, to compete at the AFBF Annual Meeting in January. 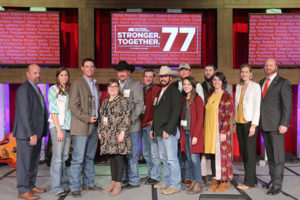 The winner will be recognized at the OKFB Annual Meeting in November and will receive a traveling plaque. Applications can be found on the OKFB Application Center here.

For more information about the awards, please contact OKFB YF&R Coordinator Zac Swartz at the home office by calling 405-523-2300.