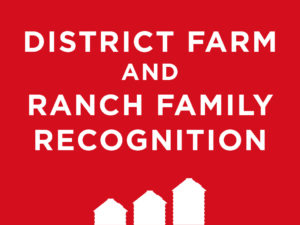 The Oklahoma Farm Bureau Women’s Leadership Committee recently named its nine District Farm and Ranch Family Recognition recipients. The program honors a farm and ranch family in each of OKFB’s nine districts who upholds the best traditions of agriculture and rural Oklahoma as they raise food and fiber for our state and beyond. “Farm and ranch families are the very backbone of Oklahoma agriculture and our state’s rural communities as a whole,” said Mignon Bolay, OKFB WLC Chair. “The OKFB Women’s Leadership Committee is proud to honor these nine families who exemplify the very best of our industry as they […]

Fourteen Oklahoma educators from across the state were awarded a basket of agriculture books for their classrooms during Oklahoma Farm Bureau’s 77th Annual Meeting held Nov. 16-18 in Norman, Oklahoma. The Oklahoma Farm Bureau Foundation for Agriculture, alongside the OKFB Women’s Leadership Committee, sponsored this year’s Bushels for Books program. The program takes donated bushels of any commodity crop, as well as monetary donations from farmers and ranchers, and provides bushel baskets of accurate agriculture books to Oklahoma educators. “Agriculture is one of Oklahoma’s leading industries, but few truly understand what it takes to produce our food, fiber and fuel,” […]

Chisholm High School senior Bree Kisling recently was awarded a $1,000 college scholarship through the Oklahoma Youth Leading Agriculture Ag in the Classroom Scholarship Challenge by the Oklahoma Farm Bureau Women’s Leadership Committee on Saturday, Nov. 17 at the organization’s annual meeting in Norman. She earned the scholarship for her work to teach local students in her community about Oklahoma agriculture. During a visit to Chisholm Elementary School, Kisling taught pre-kindergarteners a lesson based on the book, The Little Red Hen. The students learned about chickens, and about how wheat is planted, harvested, milled and used for baking.  “The project […]

The Carrel and Louise Bryant family of Ada received the Oklahoma Farm Bureau Women’s Leadership Committee’s District Eight Farm and Ranch Family Recognition during the organization’s 77th annual meeting on Saturday, Nov. 17 in Norman.  The Bryant family has a comprehensive pecan operation that they run with their two adult children, Randy and Lisa. The family also raises cattle and grows hay on their farm ground in Pontotoc County. The Bryants focus, however, on the pecans.  “We’ve got – I’m thinking – around 4,000 trees on our place now,” Carrel said. “Some of them young trees, some of them are […]

The Arnold and Roselle Herrmann family of Chandler received the Oklahoma Farm Bureau Women’s Leadership Committee’s District Nine Farm and Ranch Family Recognition during the organization’s 77th annual meeting on Saturday, Nov. 17 in Norman.  Arnold and Roselle have spent a lifetime in the area where both their families have farmed for generations. And now they have had the opportunity to raise their families around agriculture in Lincoln County, including grandchildren and great-grandchildren.  “I was born two miles from here, and I was raised a mile and a quarter from here,” Roselle said, sitting in the family’s farmhouse living room. […]

The Comanche County Farm Bureau Young Farmers and Ranchers was honored with the 2018 Oklahoma Farm Bureau YF&R Charles L. Roff Award on Saturday, Nov. 17 during the organization’s annual meeting in Norman, Oklahoma. The Charles L. Roff Award encourages county YF&R groups to improve their local committees and activity participation while strengthening the Farm Bureau organization. “We’re just excited to be part of Farm Bureau organization,” said Cody Goodknight, Comanche County YF&R chair. “We love being a part of the group where we get to support what we do every day for living. We challenge other young farmers and […]

The Oklahoma Farm Bureau Women’s Leadership Committee presented its District Farm and Ranch Family Recognition awards at the organization’s 77th annual meeting on Saturday, Nov. 17 in Norman, Oklahoma. The program honors a farm and ranch family in each of OKFB’s nine districts who uphold the best traditions of Oklahoma agriculture and rural Oklahoma as they raise food and fiber for our state and beyond. “Our farm and ranch families play a vital role in growing food, caring for the land and making our rural communities vibrant,” said Kitty Beavers, 2018 OKFB WLC Chairman. “Our Women’s Leadership Committee is proud […]

The Terry and Robin Bryant Family of Camargo received the Oklahoma Farm Bureau Women’s Leadership Committee’s District One Farm and Ranch Family Recognition during the organization’s 77th annual meeting on Saturday, Nov. 17 in Norman.  Terry and Robin raise Longhorn and BueLingo cattle in the rolling hills east of Camargo. The unique BueLingo cattle sport a wide, vertical stripe of white sandwiched between more traditional cattle colors of black, red or silver. The unique animals draw quite a bit of attention from passers-by. “It’s amazing how many just stop and take pictures,” Robin said. “I looked out there one day […]