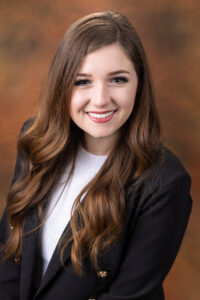 Oklahoma Farm Bureau recently named Amarie Bartel as the organization’s new economic development coordinator. Bartel will work to expand OKFB’s economic development efforts in rural Oklahoma, working with rural small business owners and entrepreneurs to help them grow their ideas and businesses through a variety of programs and resources. “I’m really excited to act as part of a change agent for rural small business owners and agricultural innovators so that they can have prosperity in their future endeavors and feel like somebody in our state is in their corner cheering for them as they work to make their own dreams […] 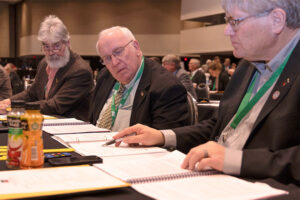 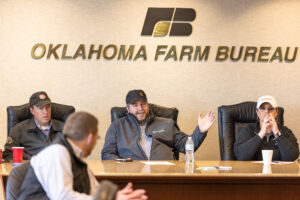 Oklahoma Farm Bureau members ages 35-55 are encouraged to attend the second-annual Generation Bridge Winter Conference Jan. 27-28, 2023, at the Hilton Garden Inn and Conference Center in Edmond. The conference will provide a chance for farmers and ranchers across the state to network with fellow agriculturalists, grow their professional and leadership skills and learn more about the industry. Generation Bridge serves as a stepping stone after Young Farmers and Ranchers with an opportunity for members to get involved in OKFB beyond the county level as they work to develop connections across the state, expand their knowledge of Farm Bureau […] 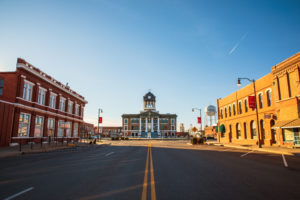 Access to high-speed broadband internet service in rural Oklahoma has long been a top issue for Farm Bureau members. From conducting daily household tasks to streaming television, and from attending Zoom meetings to accessing important software updates on farming equipment, the ability to connect to high-speed broadband is crucial for Oklahomans living in both urban and rural areas. From now until Jan. 13, 2023, Oklahomans have the unique opportunity to take part in helping Oklahoma’s case for expanded broadband access through a coverage map recently released by the Federal Communications Commission. The map shows internet service options for residential and […] 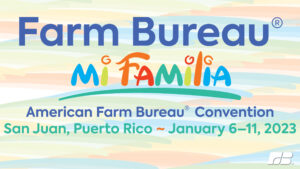 Oklahoma Farm Bureau members will head to Puerto Rico Jan. 6-11 for the 2023 American Farm Bureau Annual Meeting where they will meet with fellow Farm Bureau members, learn and grow together, compete in events and set national Farm Bureau policy for the coming year. If you are not able to travel to Puerto Rico to attend the event in-person, you can still be part of this incredible event with a virtual event registration. Virtual attendees will be able to watch general sessions featuring keynote speakers Bert Jacobs, the co-founder and Chief Executive Optimist of Life Is Good, and Big […] 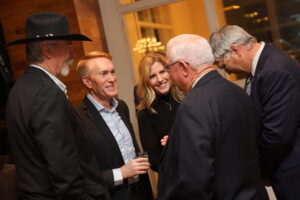 Senator James Lankford highlighted Oklahoma Farm Bureau’s second-annual Evening of Impact fundraising event on Friday, Dec. 2 at the Petroleum Club in Oklahoma City. Sen. Lankford shared with more than 70 Farm Bureau members and guests his experience in agriculture and his time in Washington, D.C. through an informal Q&A with OKFB President Rodd Moesel. Throughout the Q&A, Lankford also gave his thoughts on international trade, the state of Oklahoma’s marijuana industry, the 2024 presidential election and more. Members in attendance also had the opportunity to hear from Pat McFerron of Cole Hargrave Snodgrass and Associates during dinner as he […] 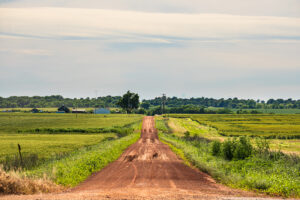 Oklahoma Farm Bureau members are encouraged to check and verify the listed broadband internet service available in their areas on a coverage map recently released by the Federal Communications Commission. The Oklahoma Broadband Office is encouraging all Oklahomans to check the services available at their address for accuracy to ensure the state will receive the grant money needed to provide adequate high-speed internet access to all of Oklahoma. “We have reason to believe that some of the information listed on the site, especially in rural areas, is not accurate,” said Kirk Martin, interim director of the Oklahoma Broadband Office, in […] 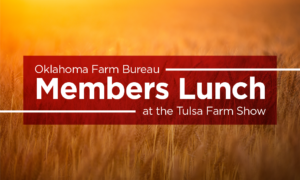 Oklahoma Farm Bureau members are invited to attend the OKFB Members Lunch at the Tulsa Farm Show Friday, Dec. 9 at 12 p.m. The lunch will be in the SageNet Center’s upper level SW Conference Room in Tulsa and is open to all OKFB members. Lunch Speakers During the lunch, members will have the opportunity to hear from two individuals from the Oklahoma State University Extension Service. Earl Ward, NE District Area Livestock Specialist, will give a presentation about surviving winter with limited hay, and Scott Clawson, NE District Area Agriculture Economic Specialist, will visit with attendees about managing tough […] 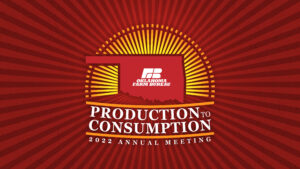 Oklahoma Farm Bureau members from around the state convened in Norman Nov. 11-13 for the organization’s 81st annual meeting where they elected new leaders, set organizational policy for the coming year, recognized outstanding members with numerous awards and learned from several speakers and presenters. “When you get Farm Bureau folks together, they just love the chance to fellowship with one another and share stories from their activities in their parts of the state,” said Rodd Moesel, OKFB president. “It has been a trying year with drought and commodity pricing swings, but everybody loves the time together and the chance to […] 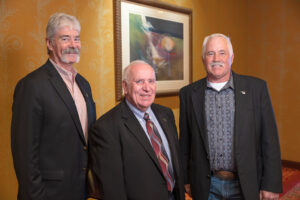 Oklahoma Farm Bureau members elected and re-elected several leaders during the organization’s annual meeting Nov. 11-13 in Norman. Roger Moore of Mayes County was elected to serve as the new OKFB District Six Director, filling the seat of retiring board member James Fuser. Moore will represent Adair, Cherokee, Craig, Delaware, Mayes, McIntosh, Muskogee, Nowata, Ottawa, Rogers, Sequoyah and Wagoner Counties. Moore and his wife, Renita, own a cattle, row crop and hay operation near Pryor. He has served on the Mayes County Farm Bureau board for 20 years. “I’ve been involved with Farm Bureau my whole life,” Moore said. “In […]